In the continuing war between idiot-proofing technology and idiots, the idiots have won one -- fooling speed cameras by putting on somebody else's license plates.

Students from Richard Montgomery High School dubbed the prank the Speed Camera "Pimping" game, according to a parent of a student enrolled at one of the high schools.

Originating from Wootton High School, the parent said, students duplicate the license plates by printing plate numbers on glossy photo paper, using fonts from certain websites that "mimic" those on Maryland license plates. They tape the duplicate plate over the existing plate on the back of their car and purposefully speed through a speed camera, the parent said. The victim then receives a citation in the mail days later.

It wouldn't be very hard in Illinois to find "certain websites that "mimic" those on the ... license plates". One such site is the Illinois Secretary of State's site, from which the plate below was printed: 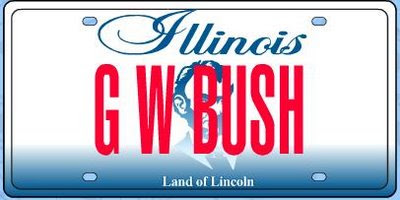