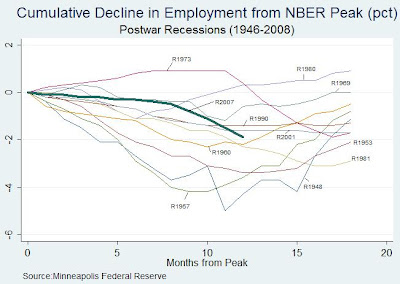 The chart above, which I found here, shows how the current recession compares to every past recession since World War II, in terms of job loss.

This chart makes it look like we've been buying into hype -- so far, the job losses in the current recession look pretty much like the ones in previous recessions. I've been alive for most of these, and this one feels worse, but maybe that's just because it's NOW, rather than BACK THEN.

One notable thing is that at least two of the industries being hit particularly hard -- financial firms, newspapers -- are industries well able to make their complaints visible to the public. There are also a lot of foreclosures -- doesn't everybody know somebody who's in this sort of trouble? -- which also makes it it personal.

The foreclosures, the bank failures -- to oversimplify these are all due to excessive leverage. Leverage increases risk, and it certainly feels like we are at a high risk of very serious economic problems.

http://www.minneapolisfed.org/publications_papers/studies/recession_perspective/index.cfm is the original page from the Minneapolis Fed. It's probably worth checking back to see how this tracks over time.
at 12:47 PM