The recession isn't over

Newsweek thinks the recession is over. Slate thinks likewise:

Now that the recession is most likely over, it's time to start looking at which companies, institutions, and individuals thrived during this grim period.

I'd like to agree, but I think this is just a media feeding frenzy, telling people what they'd like to hear. I think what we are seeing is a little good news mixed in with the bad news.

Commercial real estate has only begun to start a round of foreclosures. Unemployment isn't actually going down yet. Consumers are still overstretched, and really should be continuing to lower their amount of debt in their own enlightened self-interest.

What I see is fluctuation -- if this was the stock market, it might be called a "dead cat bounce" or a false bottom.

The graphs here, courtesy of the Minneapolis FRB, show show that recessions often show fluctuation: they don't just go down, then go back up. http://www.minneapolisfed.org/publications_papers/studies/recession_perspective/index.cfm

Take a look at 1948, for example. There's a sawtooth pattern to the employment picture that indicates either fluctuation or difficulty in measurement or both. The same problems can still occur now. 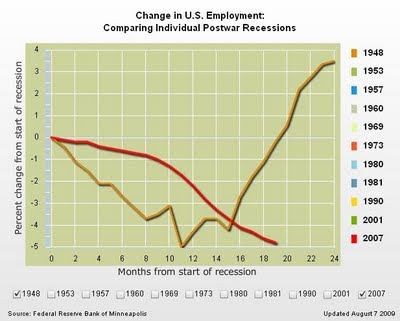 Email ThisBlogThis!Share to TwitterShare to FacebookShare to Pinterest
Labels: recession