Earlier I'd noted that the World Chess Championship was being played in obscurity.

I think that's still overall true.  The final game was yesterday (Anand won), but there's not even a brief mention in the Wall Street Journal this morning (although there's a long article on the North Korean soccer team).

But if it's bad now, it's been worse.  Chessdom has an article on the PR efforts this time compared with earlier matches, which contains this chart comparing this world championship with the previous two big events (each of which featured either Anand or Topolov, but not both).  I have to admit that I was not even aware of the previous two events.  The Chessdom article is actually a good primer on basic PR 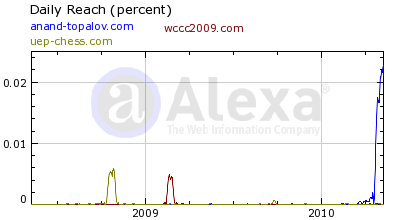 Email ThisBlogThis!Share to TwitterShare to FacebookShare to Pinterest
Labels: chess