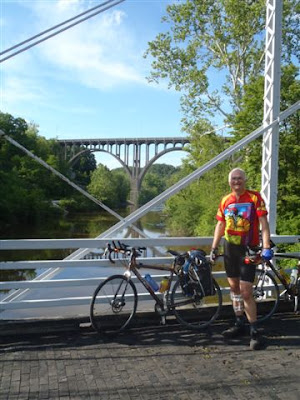 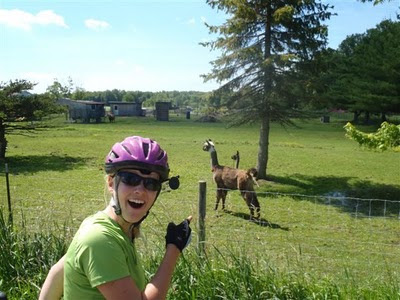 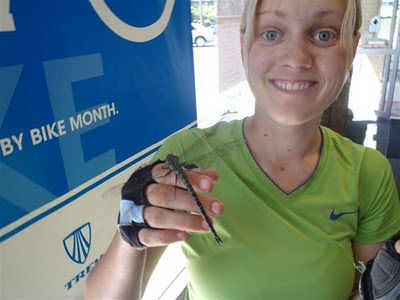 76 miles.
Rough day. We started late because we watched the Blackhawks win the Stanley Cup and the game went to about 11:30. Because we were trying to dry everything out, we had to repack everything. I needed brake adjustments, which Abby provided. We didn't get going until almost 9:30. Lots of headwinds on Ohio 14. Beautiful day, blue skies and moderate temperatures and llamas but we were going in the wrong direction, into the wind, which is very tiring hour after hour.
I got a flat. We postponed lunch and got fatigued and overhungry. We detoured to find a bike shop to get new gloves, a new pair of bike shorts for Abby and more chain lube. Eddy's Bike Shop in Stow, OH is huge. I don't think I've seen another shop so large. We also found a gigantic dragonfly in the front of the shop.
By now it's late (4:30) and we've only done 45 miles. But the rest of the way was mostly on a network of paths through Cuyahoga National Park and nearby metroparks and was quite pleasant, except where you had to make the climb out of the valley.
We decided to have dessert (first) and Dairy Queen and then have something healthier at Subway, but by the time we finished at DQ the Subway was closed so we ate more junk food at DQ (Cheeseburger and Chicken Strips). At least we both had salads for lunch.
at 9:50 PM