January job report will be awful

That’s because the Labor Department has to do a lot of estimating month to month on the number of jobs created by small businesses. That’s a birth-death model based on estimates. But the estimation has some errors. Eventually, once a year, the accumulated errors will be corrected.  This year the Labor Department has had far too rosy an outlook. From John Crudele:

… the January jobs figure, which comes out on Feb 4, will be awful.

That's the (only) month the Labor Department automatically subtracts a large number of jobs from its actual count because it thinks -- but also can't prove -- that small companies are quietly going out of business and releasing employees.

Worse, the Labor Department will correct past mistakes -- as it did last February -- and tell us how many of the jobs it previously claimed existed really don't. Right now the number seems to be around 360,000 -- and counting.

The department will probably eventually admit that it overcounted by about 600,000 jobs. That would wipe out about two-thirds of the job growth Washington has been claiming for this year.

That’s right; things are worse than we’ve been told about job creation.  There’s no conspiracy here; the model has evidently had these problems before. And it’s clear from the unemployment rate that things aren’t all rosy.

Meanwhile, the recession is/was deep and the recovery is taking a long time. There’s a great set of charts prepared by the Federal Reserve Bank of Minneapolis, including this one: 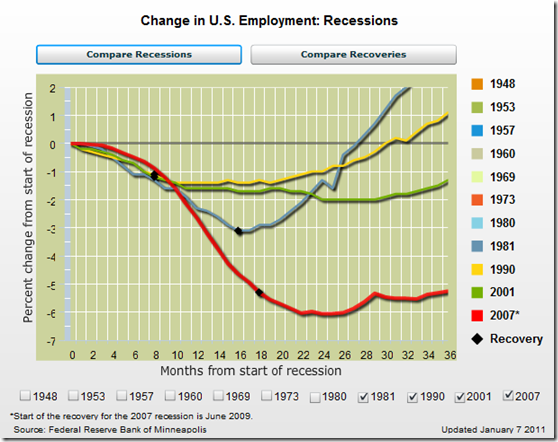