A bit more about Dad:
Alfred Kruger was the third of five children of John Henry and Mary Josephine Schaefer Kruger, and grew up on a small 44-acre truck farm near Louisville, KY.  He left school at 16 in order to help with the farm while his older siblings went to college.  He also started working with his cousin as a sprinkler fitter – perhaps little knowing that years later the business agent would tell him that he was the man who had been in the union the longest.  http://mikekr.blogspot.com/2008/02/my-father-oldest-man-in-plumbers-union.html
Dad was deferred from military service as both a farmer and a construction worker, but was eventually drafted and served in the Army in World War II, where he drove a truck.  Returning home, he married Mary in July, 1948. Their first child was born in 1950. They moved into a new house in the corner of the family farm.  Dad had some construction accidents in the 1950s and spent some time rehabbing in an easier job at the Charlestown Powder Plant, but had steady work at a construction foreman.
When Carol was discovered to be deaf at age two, they enrolled her and later Margaret and Janice in the Louisville Deaf Oral School and then St. Joseph Institute for the Deaf in St. Louis.  In 1962, the family moved to St. Louis so the girls could attend St. Josephs as day students rather than boarders.
Due to union regulations, Dad for many years had to work outside of a 50 mile radius of St. Louis and therefore was only home on weekends. Because of these business expense deductions and the deductions for rehabilitation expenses, our parents were frequently audited by the IRS. At one point, the IRS contended Dad was away from home so much that he had no home and therefore could not deduct away-from-home business expenses, but these were allowed after further appeal.
In 1980, Dad and Mom moved to a new house in St. Elizabeth Ann Seton parish in St. Charles, where they were active in the 50+ club and Dad did a lot of volunteer work with church and school maintenance. Dad and Mom went on frequent trips in their camper.  Dad retired at 62 and took up woodworking until nursing Mom during her cancer.
In 2007, Dad’s congestive heart failure and memory loss did not allow him to continue to live on his own.  For the next four years, until late January 2011, he lived with Susan and Steve and their family in Wichita.
A funeral for Dad will be held at St. Elizabeth Ann Seton Church, #2 Seton Court, Saint Charles, MO 63303 at 10 a.m. on March 12, 2011, followed by a luncheon in the church hall.  We hope to see many of our parents’ friends there – please tell others we may not have contacted.
This picture of our parents was taken in 1986. 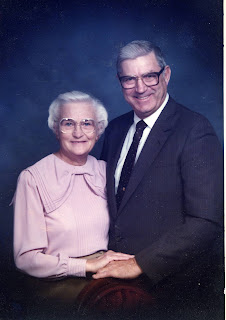