If only Congress would DO NOTHING 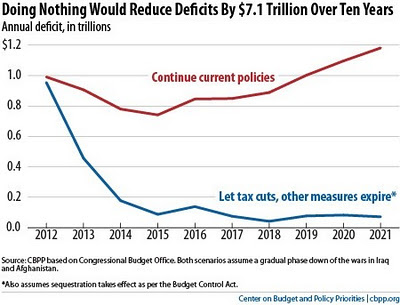 Ezra Klein contends that a good solution to many of our deficit problems would simply be for Congress to DO NOTHING.

One can easily read this as an indicator of just how dysfunctional Congress is currently, that doing nothing is better than whatever they have been doing.  One can also see this as a sign of hope: surely our Congressmen might be capable of this, at a time of gridlock.

So how does this work?

I’ll refer you to Klein’s article for more details, but it breaks down as follows:

2.       Let the Medicare physician reimbursements be paid according to schedule, instead of continually paying a higher rate.

3.       Take the automatic cuts from the “SuperCommittee”

So there you are: a do-nothing plan for U.S. fiscal health, and one that would seem to have an actual chance of getting done – I mean, not getting done.