Photographers are almost always nice people, and I feel complimented when I’m asked to help them out, but I must admit sometimes the results are a bit disappointing.

Abby and I were on the 400 trail in Wisconsin (Reedsburg to Elroy) when a photographer wanted to take our picture.  Actually, in true photographer fashion, he wanted us to ride the same portion of the trail over and over again until he got the picture he wanted.

So, what picture did they put up on the site? It’s us all right, but this is actual size (about 1 inch square).

Of course, it could be worse. We could be the family farther in the background – who had already started posing when we arrived.

The Evanston Bicycle Club evanstonbikeclub.org often starts rides at the Panera near the Wilmette train station. It’s a win-win, since some of us get coffee and maybe a bagel and we’re there early before the place gets busy.

Panera decided to put us in their newsletter, which was nice.  The photographer they sent was a bike enthusiast as well (although a mountain biker). We had maybe three dozen people at the shoot and he took dozens of photos.  But only one made it into the article, and it’s about 1.5 x 1.5 inches. 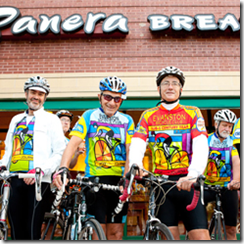 I think that’s my head on the left, in the back. Maybe not.

A side issue: note the cyclists in the photo are all men, although there were many female members who showed up at the shoot.  Panera customers tend to skew female, so perhaps this was one way to show off the attraction to male customers.