Politics IS getting more polarized

Certainly we don’t have people beaten

..in 1856, Preston Brooks, a congressman from South Carolina, viciously attacked Massachusetts Senator Charles Sumner on the floor of the United States Senate. Three days earlier, in a passionate anti-slavery speech, Sumner had used language southerners found deeply offensive. Rather than challenge Sumner to a duel, as he would have a gentleman, Brooks beat him with a cane. It was three-and-a-half years before Charles Sumner was well enough to return to the Senate. Although he never fully recovered from the assault, he served another 15 years.

The general level of civility, compromise, and polite discourse seems lower, though.   Now there’s empirical evidence that during my lifetime politics has gotten more polarized. The full post about the ADA study is at “Messy Matters” http://messymatters.com/polarized/  but the key graphic is below. Since the late 1940’s, the amount of overlap between Democrats (blue) and Republicans (red) on ADA vote ratings has become less, and each party has become more homogeneous.

This is not a good thing. A generation ago, we used to wish there was more party discipline, like they have in parlimently systems such as Britain and Canada, but they also have shorter elections and maybe are just more polite to each other.  Polarization is not working for US. 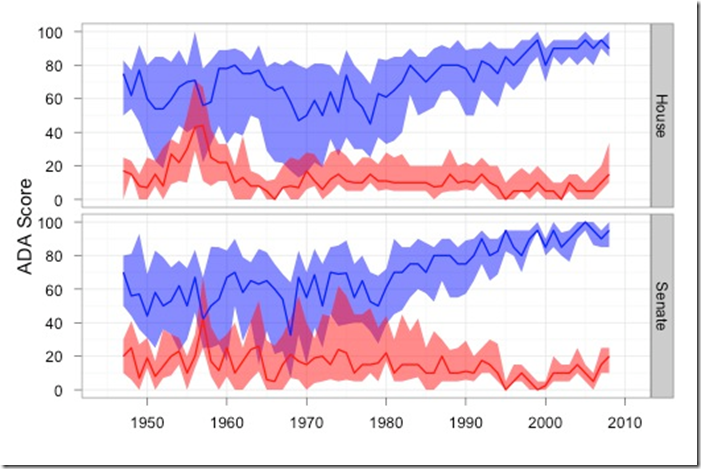