On the plus side, the Pew Research Center reports “telephone surveys that include both landlines and cellphones “continue to provide accurate data on most political, social and economic measures” when weighted to match the demographic composition of the population”  although “survey participants tended to be significantly more engaged in civic activity than those who do not participate” which may create bias in political surveys or surveys about volunteer activity such as church participation.

Still the cooperation rates are plummeting and it is hard to argue in favor of sophisticated sampling design up front when there is such a low execution of this sampling design.

What seems more important is mechanisms to control bias and adjust for it – or to find alternatives to traditional survey design altogether. 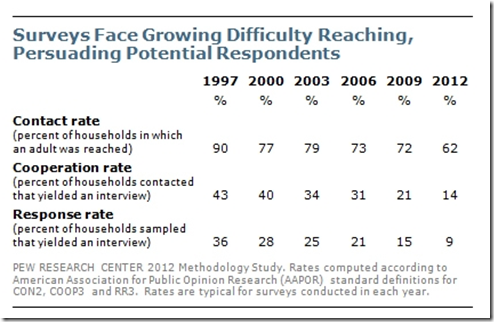 This is another technological revolution.  When I took survey courses at the University of Michigan Institute for Social Research in the 1970s, personal interviews were going out, and telephone interviewing was coming in.  A young PhD named Robert Groves did a fair amount of research work showing this could achieve accuracy with efficiency, which he explained nicely in class as the junior faculty member (to Leslie Kish).

Now Robert Groves is head of the US Census Bureau and the telephone interview is probably just about burned out as a research vehicle.