During a recent visit to our region, Secretary of the Interior Ken Salazar made two major conservation announcements in addition to visiting the Indiana Dunes National Lakeshore with U.S. Senator Dick Durbin.


Secretary Salazar announced that Hackmatack National Wildlife Refuge, in southeastern Wisconsin and northeastern Illinois, has officially been authorized. With authorization as a national wildlife refuge, the 11,200 acres for habitat and recreation can be established through conservation easements, donations, and cooperative agreements.

Hackmatack will be the first officially-designated wildlife refuge in our region and will connect the 12 million residents of the metropolitan areas of Chicago, Madison, Milwaukee, and Rockford to nature. The refuge will help protect and restore globally significant and rare habitats that are unique to our metropolitan region.

Where the heck is Hackmatack?

There’s a map there; the smaller version is below and the larger version at http://www.hackmatacknwr.org/pdfs/Maps/OptionCHackmatackMap.pdf

So, they are basically trying to fill in a big circle around Hebron, IL. The blue parts are existing areas. The big blue part in the southeast (north of Wonder Lake) is Glacial Park Conservation area. The brown is the new conservation core area.  The yellow is a “conservation corridor”.

Through the east side runs the Prairie bike trail, according to the Chicagoland Bicycle Federation map (oops, they are ATA now), but many of us think of that as the northern part of the Fox River Trail.  There’s a proposed trail extension north and west from Richmond / Genoa City shown on this map: 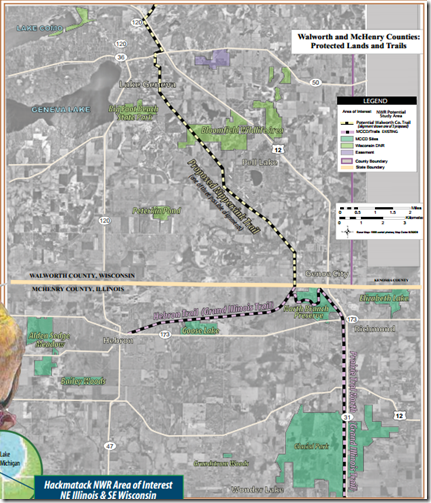 Email ThisBlogThis!Share to TwitterShare to FacebookShare to Pinterest
Labels: ecology