Retirement savings and the housing market

"the average retirement account balance for people between 55 and 64 is $291,000, which will only provide about $12,000 a year in inflation-indexed income". http://www.economist.com/blogs/freeexchange/2013/04/saving?fsrc=scn/tw_ec/too_thin_a_cushion

Another good example where the average is completely misleading. The real issue is what the income distribution for, say, 68 year olds looks like now, 10/20 years ago, and in particular 10/20 years in the future. Specifically, it would be good to compare the income distribution for those who turned 68 in 1993 (their income in 1993, adjusted for inflation) and those who turned 68 in 2013.

This isn’t likely to look good. A generation ago (65 years old 20 years ago) the retirement age was declining; now it’s increasing – and early retirement used to be associated with having saved up enough money, not because your job disappeared.

The savings rate is declining (graphs from the same Economist article) 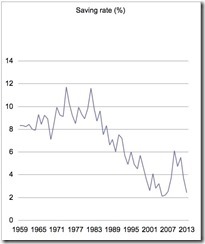 But the situation is really worse than that. The composition of savings is switching.  As the graph shows, a much heavier proportion of savings is now in retirement accounts.  This is understandable, since with fewer pensions (which aren’t retirement accounts) and more 401k plans (which are retirement accounts) people have to save for their own retirement.  But this also means that the decline in the savings rate is greater because people have to use part of that savings to replace things they didn’t have to save for decades ago (e.g. savings to replace income from pensions).  If we could adjust for this “replacement savings” the savings rate would look even lower.

(This graph also reflects the aging of the US population; older people are more likely to have more of their savings in retirement accounts.) 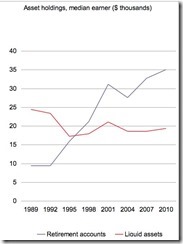 There are many implications for this, beyond the obvious one we already knew that the baby boomers are going to have a rough financial go in retirement.

I certainly wouldn't be buying any housing stocks. The baby boomers will have to pull their equity out to pay expenses, and the smaller number of households one or two generations later will already be saddled with student loan debt.

This will result in a lot of sellers relative to the number of buyers, with the consequent decline in housing prices. (see "The Great Senior Sell-Off" http://www.chicagotribune.com/classified/realestate/sc-cons-0328-umberger-20130329,0,5436034.column )  Who’s going to be living in all those McMansions from the 2000s? Who knows. Most would be big enough for two families, but weren’t designed to accommodate that (and zoning, at least in my city, would prohibit this).