Long term perspective on retirement: the end of a golden age?

There are lots of articles on how it is becoming more difficult to retire, how near-retirees haven’t saved enough, how pensions are disappearing.  All of which is true.

But it’s probably good to remember that we are comparing ourselves with one, maybe two generations back. That’s a group that can be seen as a sort of golden age of retirement.

There’s an article on Motley Fool by Morgan House that provides a lot of charts and numbers I’m going to use here.

First, it is true that more men are participating in the labor force after age 65, although the number is still low by historical standards. And it’s worth remembering that fewer jobs not require heavy manual labor, unlike my father’s job (construction pipe fitter), or my grandfathers’ (farmer and printer). 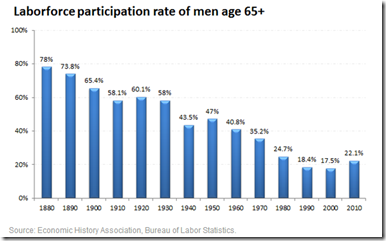 Second, in real terms (correcting for inflation) Social Security benefits have risen (although in recent years some have been subject to taxation). 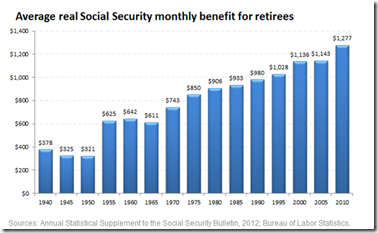 In part, this was due to an inadvertent clause in the law some decades ago, which tended to provide an overly generous cost of living adjustment.

The bottom line is how many of the elderly are living in poverty. Although there are a lot of difficulties in defining “poverty” at any one time (let along comparing across time), it’s clear the rates are low relative to past years and aren’t spiking up – at least not yet. 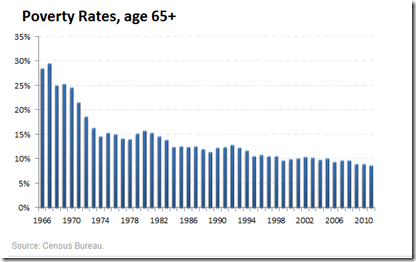 All these charts provide a source of optimism, at least as regards to current retirees, who might be described as living through a golden age of retirement in their golden years.

Baby boomers are, of course, just now entering retirement in large numbers. Any lack of saving on their part, any failure to put enough in their 401k’s when that company pension went away, any inability to save in those precious empty-nester years prior to retirement because they got downsized at 58 – all those are future effects, not current effects. 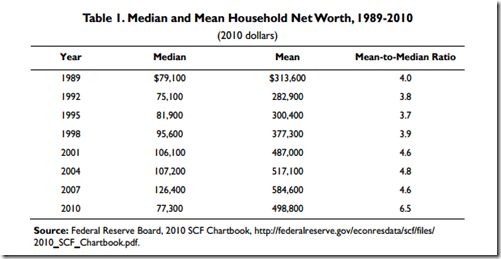 If we look a bit deeper into the age distribution, I have trouble finding a long time series, but the census bureau has one comparing 2005 to 2010.  In these 5 years, there is a definite shift lower in net worth. These numbers are NOT corrected for inflation, so the shift lower would be somewhat greater than what we see here. (The other hidden effect is that retirement accounts such as 401k accounts ARE included here, but pensions are not.) 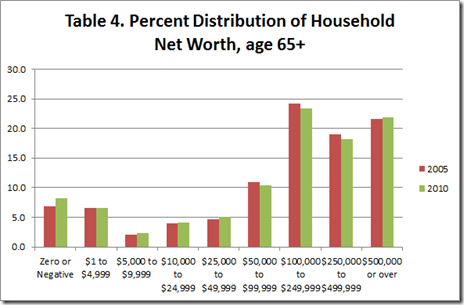 So, when we look at a long term perspective, we see that current retirees are still living in a golden age relative to those a few generations back – but it looks like that golden age may be slowly ending for many.