Today the Voting Rights Act was struck down.  The Supreme Court hinted at this in a 2009 decision, in which it ducked the central question and seemed to give Congress the chance to act. Congress, of course, did not do so.

The problem is that the act has been extended based on issues that arose in the 1960s and early 1970s and for generations before.  Congress, in their lack of wisdom, has not updated the information to reflect changes that may or may not have occurred since before I was able to vote for George McGovern over Richard Nixon in 1972 (and Barak Obama was in grade school).

So, by failing to look at conditions which were at least somewhat more current than the leisure suit, Congress doomed the act.

What if we did update the data?

The New York Times considers what might happen if the data were actually updated; I’m just going to show one example below. The Voting Rights act covers the shaded areas below:

If we look at the greatest difference in black versus white voter registration, we get a much different picture using current data: 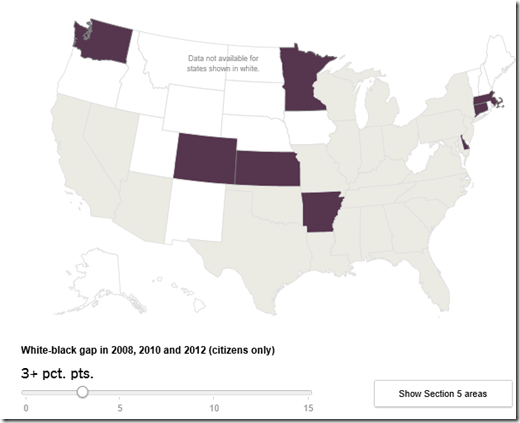 If we use other criteria, we get different patterns yet; I recommend playing around with the NYTimes graphic linked to above to see.