There’s probably no more proof needed that high money management fees don’t lead to high performance, but another nail in this coffin is in the July 3, 2013 Wall Street Journal, page c3.  This reports on a study by the Maryland Public Policy Institute and Maryland Tax Education Foundation, which looked at public-employee pension plans.

So how about Illinois?

Nobody who understands the “pay to play” nature of Illinois politics will be surprised by the fact that Illinois pays some of the highest fees (4th highest of the 35 states with full data, .63% versus a median of .37%) and has a below-average investment performance (.70% versus a median of 1.5%). 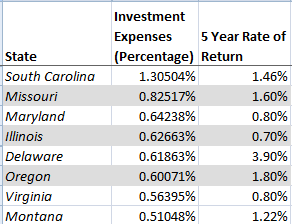 So how hard would it be to do better?

The full report makes it clear that a dumb indexing strategy would have worked better in terms of returns, and would of course have lowered costs.