I used to work for a company that got bought very cheaply by an entepreneur, who proceeded to make a lot of changes in the company.


He already had a fortune, and was in his sixties. We wondered why he kept working so obviously hard. He wasn't at all a hands-off investor, but clearly knew a lot of details down in the organization.

I used to explain it by saying that the company was his ant farm. 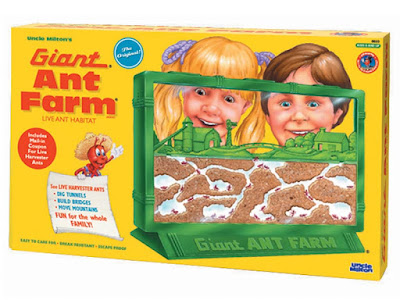 He watched us for a bit, but then
So, we're a bit like a toy. Running companies was far more interesting than, say, playing golf. As to why he was so driven to make more money, we might look at this Barney and Clyde cartoon about a man who owns a drug company:

Now, the entepreneur saved the company, which was losing so much money we would probably have disappeared. And despite feeling that every year would be the year I would finally get laid off, my career actually did quite well during his ownership.

It's a fair question to ask what "saved the company" means. Saved for whom? Almost all the employees are different. We're in mostly different physical locations. Our customers could have bought our services for others.  A corporation is really not a person, and has no feelings.

As for the entepreneur, he made enough money to make it back on the Forbes 400 list by selling the outsourcing firm (now with larger scale) and selling us.

The new owners are bloodless guys from the east coast. Unlike the entepreneur who got involved in as many aspects of the business as he could, they seem to have little interest in what we actually do. I met the entepreneur a number of times in meetings, sometimes one on one. I've only seen the news guys from the back of the auditorium on rare occasions (and that usually by audio or videoconference).

It's hard for me to believe I feel nostalgic for the crazy, disruptive years of the entepreneur's reign, when he said that in five years the jobs of everyone who wasn't having direct contact with clients would  have their job outsourced.  (I didn't have direct contact.)  But I miss the raw energy, the joy of creation that he embodied.