Breaking up the Liberal City?

This is a consideration of Ross Douthat's piece, "Break Up the Liberal City" in the New York Times:
https://www.nytimes.com/2017/03/25/opinion/sunday/break-up-the-liberal-city.html?smid=fb-share&_r=0  , so you may want to read that first.


We should treat liberal cities the way liberals treat corporate monopolies — not as growth-enhancing assets, but as trusts that concentrate wealth and power and conspire against the public good.

But bashing liberals is good sport, and a better clickbait headline, so we'll give him a pass on that.  But let's consider his proposals:

First, the easy part: Let’s take the offices of our federal government, now concentrated in the vampiric conurbation of Greater Washington, D.C., and spread them around, in poorer states and smaller cities that need revitalization.

Of course, there's a policy to try to do this now.  The Center for Disease Control is in Atlanta, far away from NIH in Washington. The mints are in Denver , Philadelphia, and San Francisco, with only the headquarters in Washington. NASA launches from Cape Canaveral for geographic reasons, but the control center is in Houston for political reasons (LBJ).  Yes, more could be done. But due to the need for professional staffing at government salaries that are often lower than the private sector (a controversial topic itself), note that those cities named are still pretty large ones: Atlanta, Denver, Philadelphia, San Francisco, Houston.  Hard to see putting the Department of the Interior in a place like Lost Springs, WY. 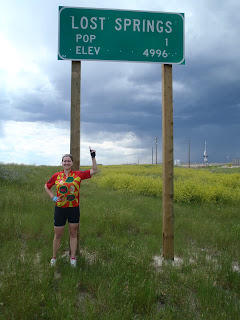 we’ll go further, starting with the deep-pocketed elite universities clustered around our bloated megalopolises. We’ll tax their endowments heavily, but offer exemptions for schools that expand their student bodies with satellite campuses in areas with well-below-the-median average incomes. M.I.T.-in-Flint has a certain ring to it. So does Stanford-Buffalo, or Harvard-on-the-Mississippi.

This has a sort of back-to-the-farm feel to it. The large state universities often began as land grant institutions, so they were located in small cities: Nebraska in Lincoln, Iowa State in Ames, Missouri in Columbia, Iowa in Iowa City, Illinois in Champaign (or is it Urbana?), Indiana in Bloomington, Auburn in Auburn, Texas A&M in College Station, Penn State in State College, etc. The problem is, that isn't where the students were in the 1960s, so they weren't really serving their populations.  So, these universities set up branches in the cities.  I went to college at UMSL: the University of Missouri at St. Louis [on the Mississippi], which was 10,000 students, two classroom buildings, a bunch of parking garages and construction cranes when I started there.  Just to finish Douthhat's examples, there's a University of Michigan - Flint and a State University of New York at Buffalo.

Do the inhabitants of Buffalo and Flint need MIT and Stanford, or do they need an affordable public college?  I lived a few miles from one of the country's finest universities (Washington U in St. Louis), but no way was I going there.  Similarly, the excellent University of Chicago is on the south side of Chicago, but doesn't seem to reflect the surrounding ethnicity.

large nonprofits: If you want your full tax exemption, show that you’re employing people in lower-income states and cities.

Oh, sure, let's make the tax code more complicated, so that lawyers can figure out more loopholes.

But fundamentally, employing the unemployable -- and there are plenty of these in the cities -- is a worthy goal no matter where they are located.

The Corporation for Public Broadcasting’s funding for flyover-country stations would be expanded, not cut, and a new Corporation for Local News would fund newspapers in smaller cities and rural areas. And this would be paid for by a special surtax on media corporations (print, digital and television) based in New York and Washington, D.C.

Well intentioned, but I'm really ambiguous about CPB being even more of a major news source if it means more government involvement. Sure, the BBC is the world standard for public funded journalism, but would we just end up with the American government's equivalent of RT over time? And if we have publicly funded newspapers in smaller cities, we're setting up even more of a barrier for private newspapers with diverse points of view to compete.