Do higher taxes on the rich raise rents for the poor? No.

I was intrigued by this meme which is circulating on social media: 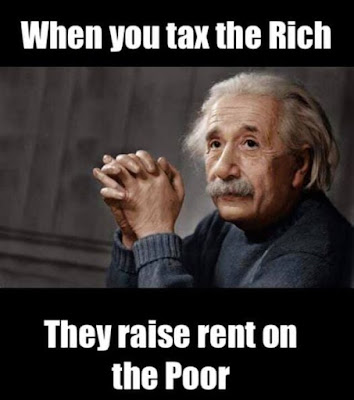 This seemed pretty doubtful, but worth a look.

To measure "tax the rich" I'm using the highest marginal federal tax rate for the year. That has a pretty wide variation over time, so any pattern should be apparent.

To measure "rent on the poor" we'd need to determine what "poor" is, which is hard enough, but also get a measure of rent paid by poor people. So, instead, I'm using the Consumer Price Index for All Urban Consumers: Rent of Primary Residence in U.S., City Average.   Because inflation makes this price index go up over time, we are comparing it to the CPI for Food at Home, so we're actually measuring the cost of rent relative to the cost of food. My argument here is that the cost of food will not be much affected by the relative tax rate.

Using data pulled from FRED (the wonderful data store maintained by the Federal Reserve Bank of St. Louis) I have annual data from 1953 through 2018. 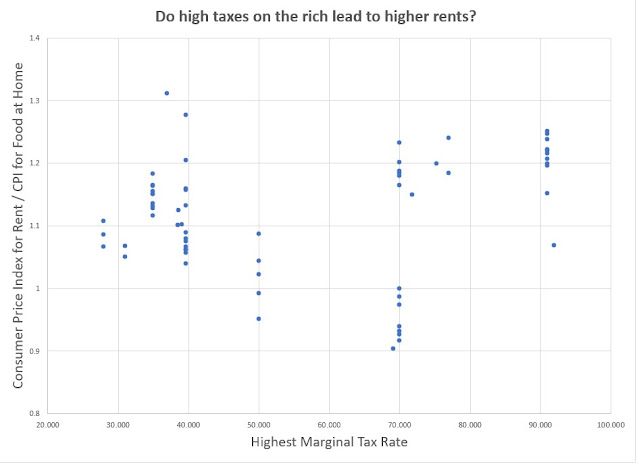 So, I think we can put this meme to rest. I am not surprised.

Now, clearly, some taxes will increase rents. Property taxes (which, as the name suggests, and taxes on property, not people) will raise rents when they are increased, because they raise the cost structure of the rental unit. But that's a different issue than taxing the rich.