Cubs bought at the top? 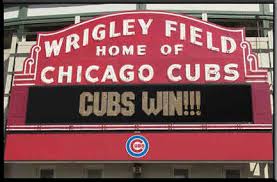 In 1981, the Wrigley family sold the Cubs and Wrigley Field to the (Chicago) Tribune Company for $21.1 million, which would be $50 million today. Even that price was regarded as high: it represented $2,050 a share, versus an open market price of $1250 a share.

The Ricketts family just bought the Cubs and Wrigley Field for ... $800 million. (Tribune figures) That looks suspiciously like buying at the top of the market.

We needn't feel sympathy for the Ricketts family, which made their money in the stock brokerage business (TD Ameritrade), and presumably are savvy investors.

But even savvy investors seem prone to buying at market tops. Remember in 2007, with the mortgage crisis in full swing, the banking company AMRO was being fought over by Barclays, Royal Bank of Scotland, Fortis, and Bank of America. Now all these banks have received billions in governmental assistance to stay afloat.

Also in 2007, Rupert Murdoch paid about $5 billion for the Wall Street Journal -- he's already written off about half that investment, which is an admission he recently paid $5 billion for something worth only half that.

This may be some consolation to those who paid too much for their house.

Not much consolation though. While many of those people are looking at foreclosure or bankruptcy, everybody involved in the transactions above remains wealthy. Maybe not as fabulously wealthy as they were before, but still wealthy.
at 11:17 AM