How much does it hurt to lose your job in a mass layoff?

A lot, not that this is news.

These results reflect discounting at a 5% annual rate over 20 years after displacement.

That’s from Stephen J. Davis and Till von Wachter (U Chicago and Columbia, NBER).  It quantifies things that are already obvious: it’s worse to get laid off in a group in a  bad job market (>8% unemployment) than in a good job market (<6% unemployment). The effects persist – you may get a job faster than this time, but there is not only the loss of earnings while you are out of work, there is the possibility that your next job may pay less OR it may put you farther behind for your next promotion.

Another sidelight of the study is how common job loss is:

Figure 1 highlights two key points. First, the sheer volume of job loss and
unemployment incidence is enormous – in good economic times and bad. For example, the JOLTS-based layoff rate in Figure 1 averages 7 percent per quarter from 1990 to 2011.


Multiplying this figure by nonfarm payroll employment in 2011 yields about 9 million layoffs per quarter. Quarterly averages for job destruction and unemployment inflows are of similar magnitude. Initial UI claims average about 5 million per quarter. In short, the U.S. economy routinely accommodates huge numbers of lost jobs and unemployment spells. 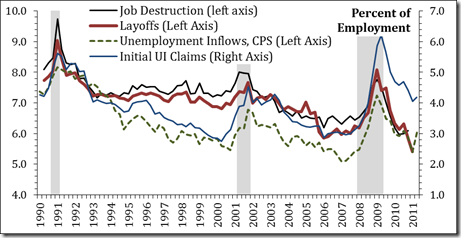 (there is more detail about this figure in the article)