“which every scientist agrees we must do”

Jacki Lyden of NPR was interviewing a scientific activist, who was urging a course of action “which every scientist agrees we must do”.

At  best – at best – this is what we call in marketing “puffery”. That’s when you make a claim in advertising that isn’t true, but which can be defended on the grounds that nobody would take it seriously.

Of course, there is probably no nontrivial scientific topic on “which every scientist agrees we must do”.  For one thing, science is a broad field. Astronomers and DNA researchers can both be esteemed scientists, but understand little about each other’s work or the validity of their claims. For another, the science related to many specific issues related to public policy is relatively complex, and even researchers in the field may disagree about whether there is a problem, how severe it is, and what should be done about it. There may be a consensus (most common position), but waiting for unanimity is waiting for something that’s just not going to happen in a realistic time frame.

The claim “which every scientist agrees we must do” in this interview is an appeal to authority rather than an appeal based on the explication of an argument. It’s likely that the activist in question has made such an argument in his more extensive work, but in the interview he came across as “you should do this because I say so and everyone agrees with me.”

Well, it’s radio; I missed the ID at the beginning and was paying attention to traffic at the end.

From NPR.org, I see that this is Bill McKibben, the founder of 350.org. That page just has interview highlights, not the full interview transcript, and does not contain this phrase.

He’s right about some stuff

The interview contains what seems to be a blatant exaggeration: “Food prices were up 40 and 45 percent around the world because the harvest failed in North America.”  This sounds ridiculous because we live in North America and shop in grocery stores and buy mostly packaged goods.  The cost of actual food is a relatively small contributor to these costs.  So is we look at food using the Consumer Price Index we see only a 1.8% increase in the past year:

but if we look at actual food, we do see very large increases in the SOME food items which are affected by the North American harvest. Here’s corn: 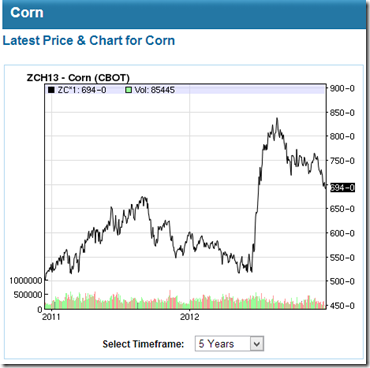 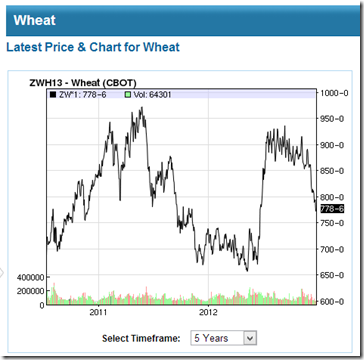 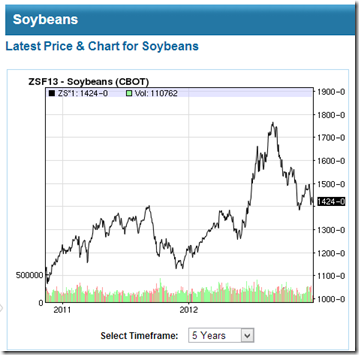 But here’s rice, which isn’t grown in the great plains of North America: 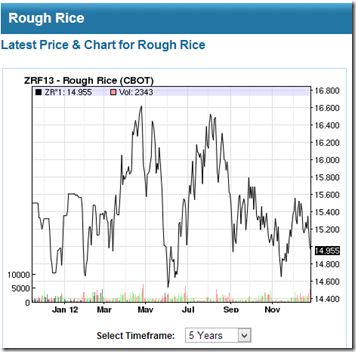 Looking at a more world-centered price for rice, here’s another source: 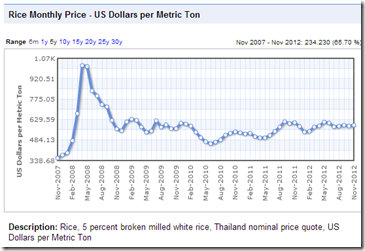 We we look at an overall index (Commodity Agricultural Raw Materials Index), we see an increase in 2011, not 2012 (important caveat: this also includes cotton, leather, and other agricultural commodities which are not “food”) 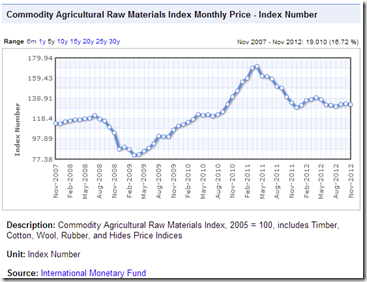 So how might we evaluate the statement “Food prices were up 40 and 45 percent around the world because the harvest failed in North America.”?

It’s clearly true that SOME food prices were up a big percentage, and since “Food prices” could mean “at least two prices”, this means McKibben is strictly correct that there were food prices which were up 40% or more (and it seems very, very likely this was due to the North American harvest conditions – along with our strange American fascination for ethanol).

But if we mean “Food prices” in the sense of “Food prices in general”, McKibben’s claim seems to be hyperbole.

I note today this item:

Vermonter of the Year: Environmentalist Bill McKibben has been among the most effective voices raising the alarm about the threats of climate change, the Burlington Free Press said in naming and Ripton, Vt., resident its ‘Vermonter of the Year” for 2012.