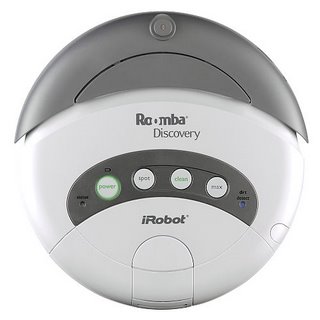 My wife and I have had a 21 year argument over cleaning the basement. The details are pretty boring, but suffice to say I'm right.

In hopes of helping with this persistent burr of an argument, I bought an iRobot, one of those cleaning robots advertised on TV and currently in huge displays at CostCo -- which means they are either selling well, selling poorly, or there is a new model coming out.

So far, so good. The setup was easy. The space is considerably larger than the "room" the unit is made to clean, and our unfinished basement, not even swept or vacuumed in months, is a lot dirtier than the unit probably assumes, as well.

It charged up quickly (2-3 hours). It worked well. At one point, it emerged from underneath something covered with cobwebs, which I took to be a sign of dedication. It did jam a couple of times, which means I won't be running it in unattended mode for a while. It couldn't find its way back to the base (charger) on its own, and had to be carried back with its batteries dead like a four year old after a trip to the park.

It's not a heavy duty vacuum by any means, but then I don't need the basement THAT clean, so maybe this will work out. More later.
at 9:09 PM