January 16, 2008: AP headlines the inflation rate, but body of the story relates to slowdown in retail sales. It's not a good sign when there's so many weak economic indicators you have to be sure you are matching the bad headline to the bad story.

The headline: Inflation rate is worst in 17 years

The story (accompanying a picture): Doc Garrett works the Gargano's stand at the Italian Market in Philadelphia, Tuesday, Jan. 15, 2008. Frugal shoppers cut back on their spending at the nation's retailers by 0.4 percent in December, wrapping up the weakest sales year since 2002, in a gloomy report that fanned fears of a recession. The Commerce Department reported Tuesday, Jan. 15, 2008 that the drop in retail sales, which followed a brisk 1 percent gain in November, marked the worst showing since June, when merchant sales declined by 0.8 percent. (AP Photo/Matt Rourke) 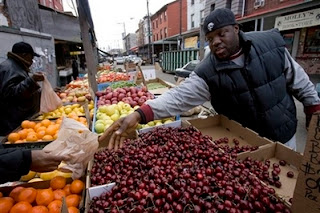