My father: oldest man in the plumbers union? 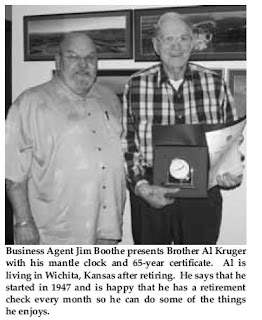 My father recently received his 65 year certificate and mantle clock from the Sprinkler Fitters Local 669 (part of the plumbers union). The business agent told him that he's the oldest guy in the union. (and/or possibly the man who's been in the union the longest)

Dad dropped out of school at 16 to join his cousin Bob Bleemel installing fire sprinklers, something he did from then on until retirement (except for a stint in the army in World War II and some months working at the Charleston Powder Plant while he recovered from a construction accident).

It's no joke about the retirement check. As the person who does his taxes, it's clear that the union retirement check has been a big help over the 22 years Dad's been retired.
at 9:53 PM