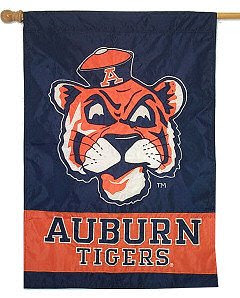 Andy Eggers at the Social Science Statistics Blog has this fascinating entry:

Abstract:In this article, the authors use data collected from nearly 4,000single-family residences in Auburn, Alabama to investigate empirically whether nonpolitical expressiveness (displaying support for Auburn University's football team outside one's home) is related to the probability that at least one resident voted in the national/state/local elections heldon November 7, 2006. Controlling for the assessed value of the property and the length of ownership, the authors find that the likelihood of voting by at least one person from a residence with an external display of support for Auburn University is nearly 2 times greater than from a residence without such a display. This suggests that focusing narrowly on voting as a reflection of political expressiveness may lead researchers to overstate the relative importance of expressiveness in the voting context and understate its more fundamental and encompassing importance in a variety of contexts, only one of which may be voting.

Ungated working version here; I haven't read it yet.

I'd never thought of this link before, but it makes sense. In both cases, the individual's behavior (putting up football paraphenalia, voting) has only a tiny effect on the outcome (winning games, determining the election). So it makes sense that people who have faith that one form is efficacious might have faith that the other form is efficacious.

And, in both forms of behavior, there is some demonizing of the opponents (the University of Alabama, the opposite party).
at 8:43 AM