Bring back Reagan -- which Reagan? 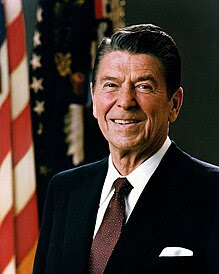 According to Rasmussen polling, enthusiasm for Ronald Reagan is great:

Ronald Reagan isn't just a Republican thing anymore. Fifty-six percent (56%) of U.S. voters say the Republican Party should return to the views and values of the iconic 40th president of the United States to be successful, according to a new Rasmussen Reports national telephone survey.


Nostalgia isn't what it used to be. What do people mean by that? For example, do they want the rhetorical Reagan, who preached fiscal conservatism, or the actual Reagan, who ran huge government deficits? Do they want a president as a reigning symbol, with the details delegated to others? Maybe we just want a president whose demeanor inspires respect, rather than a president whose demeanor inspires comedians? This poll result is interesting, but there's more to figure out.
at 11:25 AM

Email ThisBlogThis!Share to TwitterShare to FacebookShare to Pinterest
Labels: Reagan