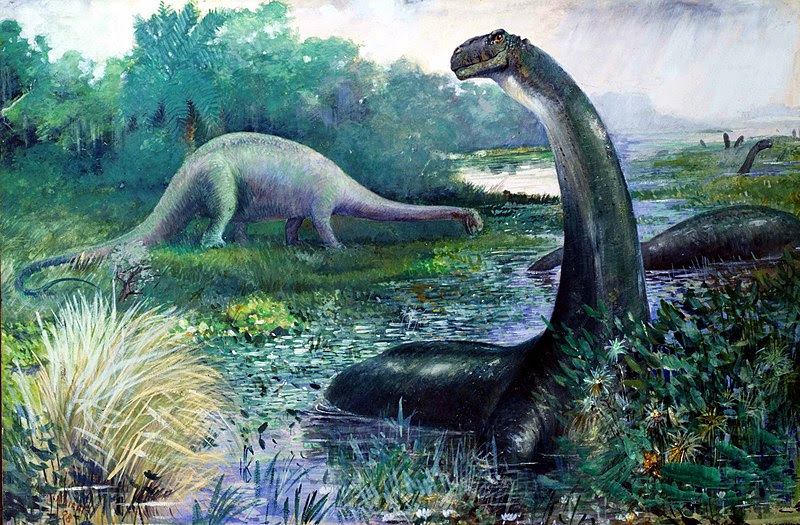 There's been further statistical modeling done on the relationship between bone size and weight, and it now seems dinosaurs might only have been half as heavy as we thought.

If he’s right, the biggest dinosaur, the Apatosaurus louisae (formerly of the Brontosaurus genus), wasn't really 42 tons (38 metric tons), but instead a slimmer 20 tons (18 metric tons).

The influential 1985 study that has been the basis for most mass estimates derived its models from measurements of large specimens of modern-day animal species—from rodents to hippos. But Packard and his colleagues claim that flawed equations and a sampling of uncharacteristically large individuals have overestimated weights ever since.

The standard method of prediction, using the statistical tool of back-transformation from logarithmic forms, estimated one elephant’s weight at 20,283 pounds (9,200 kilograms) based on the length of its femur. But the new, nonlinear regression model predicts 13,007 pounds (5,900 kilograms). The actual weight of the elephant? Thirteen thousand pounds (5,897 kilograms).

If the biggest lizards were half as massive, there would be far-reaching implications for our understanding of the animals, including a rethink of how they moved, their metabolisms and, perhaps, even their life histories.

For an added bit of humor: Scientific American is justly famous for the explanatory graphics in each article. But the image accompanying this SciAm blog post is the one above, from ... Wikipedia!
at 8:02 PM