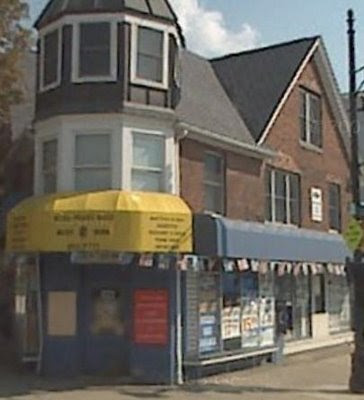 I was in Ann Arbor last week, where I spent a long time in graduate school in the 1970's. A lot changes in 35+ years. In many cases, the buildings were the same, but there were different businesses in them, or the businesses had changed in some large way. For example, Howard Cooper Volkswagen still sells Volkswagens, but there's a much larger dealership next door, Howard Cooper Honda.

The only two businesses I saw that looked the same now as it did in 1972?

The Blue Front at State and Packard (picture above). They sell magazines there, and back in the day it was rumored to be the place to get racier magazines. I didn't see if that was still true.

Moe Sports Shop on North University, where I purchased squash raquets years ago. It looked venerable then, and on the outside looked the same now. It's funny how it seems to have survived the onslaught of big-box sporting goods stores.
at 3:10 PM