NOTE: The picture, from the LA Times story, actually shows the funeral of George Molchan, who died in 2005 after portraying Oscar Mayer's spokesman, Little Oscar, for more than three decades.

Oscar Mayer's meats were as good as anybody else's standard quality, but their advertising was terrific. We once got our kids out of bed to drag them to a nearby restaurant, where the Weinermobile was parked in the lot.

When I was at the Henry Ford Museum in Dearborn, MI last month I made sure I had my picture taken next to the Weinermobile -- and took pictures of my co-workers as well. 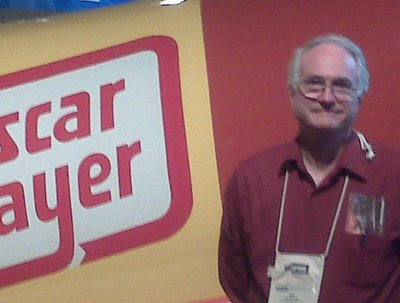 Email ThisBlogThis!Share to TwitterShare to FacebookShare to Pinterest
Labels: marketing