Are intellectuals more liberal, or does statistical clutering make it so? 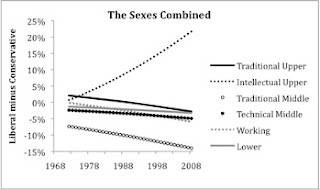 Charles Murray posts and interesting graph in his blog  http://blog.american.com/?p=4259 , which Andrew Gelman responds to in his blog http://www.stat.columbia.edu/~cook/movabletype/archives/2009/08/the_divergence.html#more

Gelman’s post and 's post are both long, so I may have missed it, but what is this graphing? It can't be real data because the lines are too straight. Also note all but the "Intellectual Upper" are essentially parallel.

These aren't standard categories that I've ever seen, so there's some sort of clustering going on.  Was this clustering looking at "hey, was there any group of people who became more liberal since 1972?", and then post-describing them?

is posting on the American Enterprise Institute site. While some of the AEI stuff is interesting, I don't know that they've ever been convicted of objectivity.

p.s. I like Gelman’s understatement: "Grad students ... they're not at the 95th percentile of income"