Ever wonder why we started using Mercator projection on world maps? That's an easy question. "Mercator projection is designed so that lines of constant bearing on the Earth correspond to straight lines on the map." writes John Cook in an interesting blog post on this topic.

Mercator projection is a good example of “form follows function” — once you set out to have lines of constant bearing straight, this is what you end up with.

The political part lies in considering why/how this became the standard projection used for school wall maps. Schools aren’t on board ships, and navigation isn’t taught in grade school. One would think that the relative size of countries would be more important.

Here’s one of my favorites: equal-area, south at the top, centered on Australia:

But you can get an idea of how much a new map makes you think differently by the simple task of flipping the map, even without a projection change. 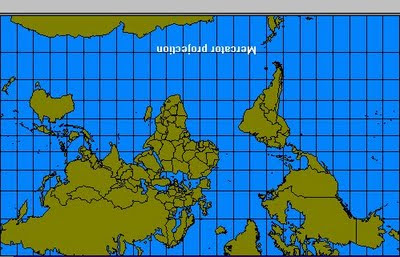 Email ThisBlogThis!Share to TwitterShare to FacebookShare to Pinterest
Labels: map