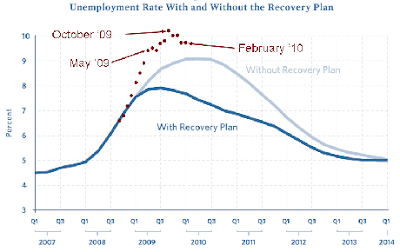 Andrew Gelman links to this chart from Innocent Bystanders.

Government figures are nice, but I suspect votes are driven more by whether your immediate circle of friends is doing well or not -- your Facebook friends may have more impact on the election that the official stats?

Are the official stats corelated enough with this circle of friends to be as meaningful as they used to be?

Note important government stats are more questionable. The source you liked above notes "There’s been a growing realization that the unemployment rate doesn’t mean much" due to labor market exits and more extensive use of part-timers.

Productivity stats have been similarly compromised as government statistical methodology lags behind ecoonomic changes. I've written more on this at http://mikekr.blogspot.com/2010/03/is-productivity-sham.html
at 7:23 AM