July 22: Boise ID to Ontario OR 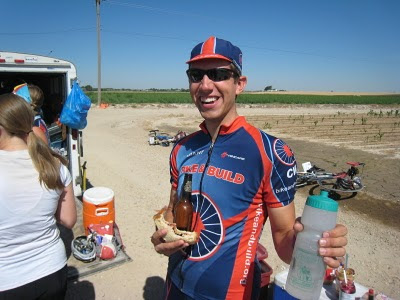 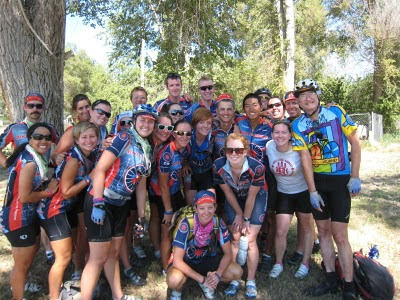 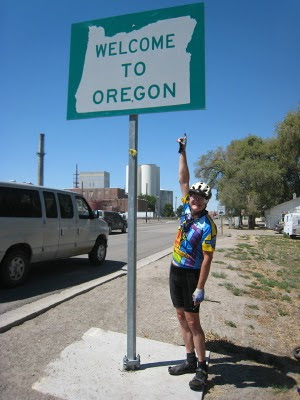 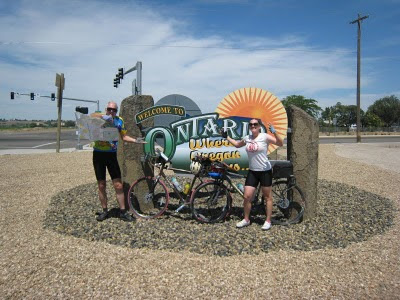 76 miles
We took a rest day yesterday; laundry, a trip to the bookstore, sleep, and Oscar Wilde's "An Ideal Husband" at the Idaho Shakespeare Festival.
Today Beth and I headed out while Abby took Deb to the airport to fly home for her reading class. Abby is also recovering nicely from her fall, but the butt's still sore.
The Boise Greenery is a nice set of paths through parks along the Boise River. These were wonderful -- although perhaps because trees aren't such a common think in arid Idaho, we saw other places where there were tree root upheavals, although none so bad as the one that caused Abby to fall.
We saw some riders all in similar jerseys just after the Greenway, and then saw them again when we had a rest stop. They were from www.bikeandbuild.org, a group that is biking across the country raising money for affordable housing. Every few days, they do a "build" day and volunteer at a Habitat for Humanity site or something similar.
Like us, they are going east to west; they started in Virginia Beach, VA about 10 weeks ago. We rode with them the rest of the day and took pictures at the Oregon line, where there is a big sugar beet facility. This is our last state line crossing!
Note in the top picture the young man is holding a North Shore Century water bottle! Not what you expect on the Idaho/Oregon border.  Hope he comes back this year.
Their route was less direct than ours, so we did more miles than we'd figured, but it was good to have some company and they seemed like a very nice group.
We ended the day in Ontario -- not the one in Canada, though.
at 6:26 PM