Should we let housing prices crash? 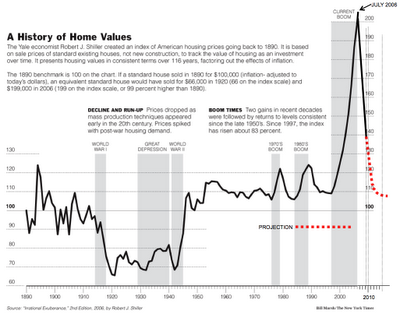 If I had any faithful readers out there, they would know that I don't think the government should be propping up housing prices, and I've been saying this consistently for years. I think they should just let them return to normal levels.
Why?
Reason #1: Then normal younger people would be able to afford housing at normal proportions of their gross income.
Reason #2: I don't think this can realistically be done at a realistic price.
Since, in the end, government spending has to be covered by current/future tax revenue, government attempts to keep the price of housing high are a huge transfer of assets from people who don't own houses (on balance, younger and poorer) to people that do own houses (on balance, older and richer) -- and the banks that financed them. [The Bernacke-Paulson-Geithner policies begun under Bush and embraced by the Obama administration have been a big bailout for the banks, but of questionable value for the rest of us.]
Housing prices aren't normal yet. They are still too high, by historical standards. The Case-Shiller index is shown in the picture. Sure, there's a big crash -- but note that even this projection still has housing prices above an index of 100, which means they are still high by historical standards.
Now I find that "experts" agree with me. At least some "experts" quoted in the New York Times:
http://www.nytimes.com/2010/09/06/business/economy/06housing.html?_r=1&th&emc=th

"Some economists and analysts are now urging a dose of shock therapy that would greatly shift the benefits to future homeowners: Let the housing market crash.

"When prices are lower, these experts argue, buyers will pour in, creating the elusive stability the government has spent billions upon billions trying to achieve."