No faith in Illinois Governor candidates Quinn and Brady 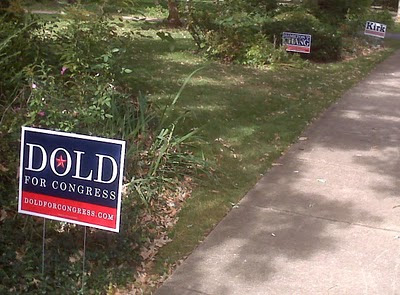 This yard is typical of yards that have political signs this year. There are signs for Congress (Dold or Seals), state representative (Chang or Biss) and Senator (Kirk or Alexi) -- but I've only seen one Quinn sign and one Brady sign. I've actually seen more misplaced Pollak signs -- he's running in the adjacent congressional district -- than signs for either of the candidates for governor.

What does this mean? The state is in deep, deep financial trouble. The Democrats have been running the state for 8 years (governor, both houses, and all state offices) but have only made things much worse. The Republicans since Edgar was governor have been similarly inept / corrupt / cowardly or whatever adjective you might choose.

I like Quinn's positions, and admit he had a tough act to follow when he became governor after Blago's impeachment, but don't think he's up to the task of getting needed change through the legislature on financial issues. I don't have a lot of agreement with Brady's positions, and suspect he's also not up to the task. I suspect the lack of Quinn and Brady signs indicates most people in this area don't have much enthusiasm for Quinn and Brady, either.

I'm voting Green again. It's not that I think Whitney is up to the task, either, but it will at least serve as a protest vote.