Where is this U.S. bank?

Where’s this inanity from?

It’s from an article in the Washington Post http://www.washingtonpost.com/opinions/five-myths-about-millionaires/2011/09/21/gIQAvyGqqK_story.html?hpid=z3 called “Five Myths About Millionaires” by John Steele Gordon,

Andrew Gelman posts all in a lather about this article. I thought “can it really be this bad”? Answer: yes.

I guess the first myth should be that millionaires pay attention to their environment. Maybe with that much money, they can ignore the fact that CD rates look mostly like this: 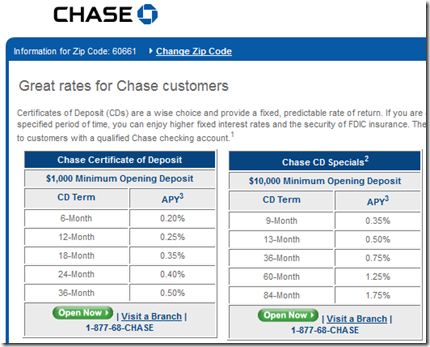 So, Myth #1 is based on badly, badly out of date information. Or may be the article was written in 1995, and the Washington Post has a long publication lag.

So is myth #2 (“millionaires think they are rich), which confuses $1 million in net worth and $1 million in income.  Ignorance or malice?

On Thursday, 44 percent of people voting in an online survey as part of the GOP debate coverage said that a $1 million annual income made a person “rich.” In a 2008 survey of affluent Chicago households, only 22 percent thought a nest egg of $1 million was rich. In March, four out of 10 millionaires surveyed by Fidelity Investments said they do not feel rich. That same month, a majority of investment advisers surveyed in a Scottrade poll said that $1 million isn’t enough for retirement.

Myth #3 is “millionaires pay less taxes than poor people”. This is a clever shifting of emphasis. The political argument is that rich people are undertaxed relative to middle class people. Even Warren Buffet was comparing taxes he pays versus people in his office pay.  These people aren’t “poor”. Lower middle class maybe, but not poor.

Clearly, since the poor pay no federal income taxes (a fact well known to poor people), rich people can hardly pay less. This is a myth created in the writer’s own head. Not surprising it’s wrong.

Myth #4 is that millionaires share the same political beliefs. OK.

That’s open to debate, but I’m pretty tired of hearing “Taxes on the rich are taxes on people who create jobs.” Just as rich people don’t share the same political beliefs, they don’t all create jobs at the same rate. In fact, I’d argue that it’s the people who are becoming rich, not he people who have always been rich, who are creating jobs.

If you are becoming rich, you may likely be doing so by building or expanding a business. That creates jobs.  If you’re rich because your great-grandfather built a business, it’s hard to see that you are creating jobs.  You may employ people directly or indirectly, but that’s maintaining jobs, not creating jobs.

It seems to me that tax policy on those who are creating jobs now versus those whose ancestors created jobs in the late 19th century isn’t all one big bushel basket.

Consider, for example, that a stock IPO (initial public offering) provides funds to the company to invest.  But subsequent buying and selling of stock on the secondary market does NOT provide funds for the company to invest.  For example, when I bought some BUD stock a few weeks ago, my money didn’t go to Anheuser Busch Interbev – it went to somebody who previously owned those shares.  These have much different economic effects. It’s not that one is good and other bad – that’s not my point.  My point is that they have different effects.

There is a good point made that the term “millionaire” is anachronistic. It meant something when a Coke was 5 cents and gas was a quarter a gallon, but doesn’t have the same meaning now. But surrounding that point with a bunch of “unfacts” isn’t helpful to the political debate.