Research in environmental sciences has found that the ergonomic design of human-made
environments influences thought, feeling and action. Here, we examine the impact of
physical environments on dishonest behavior. Four studies tested whether certain bodily
configurations—or postures—incidentally imposed by our environment lead to increases
in dishonest behavior. The first three experiments found that individuals who engaged in
expansive postures (either explicitly or inadvertently) were more likely to steal money,
cheat on a test, and commit traffic violations in a driving simulation. Results suggested
that participants’ self-reported sense of power mediated the link between postural
expansiveness and dishonesty. Study 4 revealed that automobiles with more expansive
driver’s seats were more likely to be illegally parked on New York City streets. Taken
together, results suggest that: (1) environments that expand the body can inadvertently
lead us to feel more powerful, and (2) these feelings of power can cause dishonest
behavior.

Note that the authors have wisely and appropriately done 3 studies along with the fourth observational study before going into print with this, which provides convergent validity.

This is a blog, so I might as well speculate wildly, so long as I admit it.

I will note that corporate offices vary in the amount of power they convey.  This is usually understood in terms of the power and prestige of the person within the organization, and serves as a form of signaling. For nearly all purposes, the size of the office doesn’t really matter for the productivity of the person using the office (I mean offices with walls, not cubicles).

But what if there is another reason for this?  In general, corporations depend on the honesty of the employees at lower levels. But in my experience working for large corporations, I have found that for higher levels jobs (division or company president, for example), an excess of honesty isn’t always regarded as a good thing.

The clearest example I can think of was IRI’s CEO in the early 1990s, James Andress, who repeatedly told employees he didn’t understand why some employees were tempted to sell their options, because the company was headed toward $100 a share soon (it was in the high $30s) – while the lying bastard was selling his own options and shares. (this was covered at the time in Crain’s Chicago Business, and the subject of an insider trading suit which the company settled out of court – i.e. the SOB got to keep his money while those who hadn’t sold took gigantic personal losses  when the stock tanked when the company had to “restate” previous “earnings”).  But I don’t hope the asshole burns in hell. No, not me.

So, what if one unintended effect of giving executives large, cushy offices is to give them the powerful-feeling posture that allows them to stretch the truth?  Maybe not to lie, exactly, but at least to be “motivational” to the employees during hard times by shielding them from harsh realities that might (or might not!) be in their future?

Maybe it helps to have that big cushy chair, the big office with the personal secretary, the private parking place, and to have a posture that looks more like the guy on the left than the guy on the right? (James Andress had been a military officer and had excellent posture.)  Maybe that helps you do what needs to be done for the company (or to do what needs to be done for you to keep the job with that cushy chair). 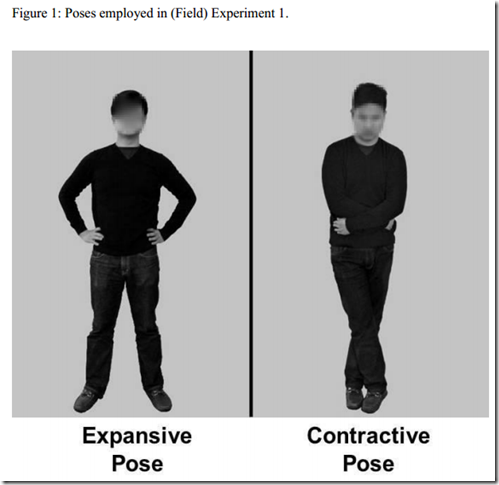 1. There’s a lively discussion on the statistical issues with this study on Andrew Gelman’s blog.  Those who have read the study more closely are finding a number of issues.

2. The Trib has an article on this study that takes much the same approach on my comments above.  This is reprinted from the Washington Post, so it’s likely showing up everywhere.