What’s in your attic?

It’s the stuff of a young boy’s fantasies:

“A 10-year-old German boy was playing in his grandmother's attic when he made a startling discovery: a sarcophagus holding a mummy that had lain undiscovered for decades.”

It’s unclear where this came from. The grandfather ‘passed away 12 years ago, went traveling through North Africa in the 1950s, but spoke very little of his travels. "He was of the older generation who experienced a lot in the war and didn't really talk about anything. I do seem to remember him mentioning having been to the city of Derna in Libya,"’ said his son, the 10 year old’s father.

There are some good pictures with the article. 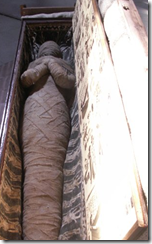 When we moved into our house, it was clear that there was a hidden room – there was a storage cubbyhole off one bedroom, and there had to be room for another off the other front bedroom. But there was no door into this space.  I hired a carpenter to put a door in, so we could use this as storage space.  I also wondered what would be found in this area.

I didn’t expect a mummy, of course. I expected some construction leftovers – maybe a couple of old Coke bottles that would be of some value.  But there was nothing.