Short term, I can do without the Census Bureau: 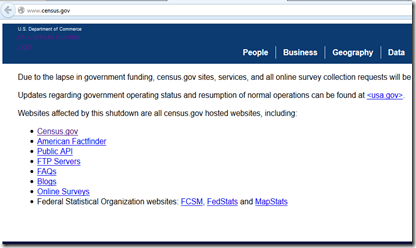 Short term, I can do without the Bureau of Labor Statistics (unemployment, Consumer Price Index, and so forth).

These aren’t essential services in the same sense as active duty military, or air traffic controllers.

And I can do without transportation statistics for a while. For that matter, any delay in highway funds of a

And it’s not as though there aren’t some programs in these agencies that might deserve cutting, or need to be cut for other priorities.

Maybe trying to export democracy and “nation building” to the Middle East (pretty much a failure) has sapped our energy from running our democracy here at home.

Maybe we ended up with more effective presidents when they were chosen in smoke-filled rooms – perhaps that at least gave us presidents who were able to run enough of an insider game to deal effectively with Congress. Maybe the primary system is just too much direct democracy.

Maybe I’m just being too pessimistic. I hope I am. I fear I’m not.