I got a letter from target. Dozens of millions of people are getting the same letter, but in case you didn’t get it I enclose it below.

The chutzpah part is highlighted.  Target has a lot of nerve lecturing me on identity security, after being irresponsible for one of the largest breaches of personal information security in history.

This is in the same league with Catholic bishops preaching morality, after their immoral actions in the pedophilia scandal have led to much human misery (and a large wasting of the assets of the church).

In addition, the generic advice given is of no value. Anyone who’s been paying attention the last 20 years already knows this stuff. It’s the informational equivalent of slipping on the ice and then having someone say “Careful, it’s slick.”  If you don’t already know those 3 bullet points, one form letter from Target isn’t going to have any impact. 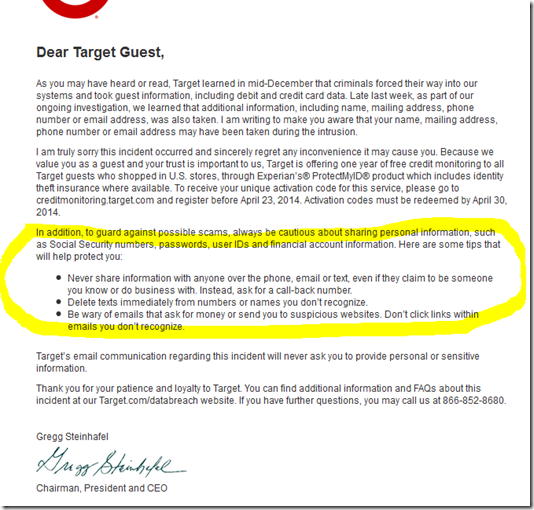 Email ThisBlogThis!Share to TwitterShare to FacebookShare to Pinterest
Labels: scams