Just because something has a low probability doesn't mean it's unusual

Just because something has a low probability (if things were random) doesn't mean it's unusual.

There's a great illustration of this in Martin Gardner's book, The Magic and Mystery of Numbers.

Consider a lattice, which will look like a Cartesian plane from middle school math: 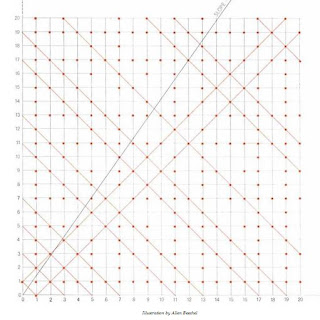 From the point 0,0 in the lower left, we can draw a large number of lines from that 0,0 point to other points in the lattice. We see nothing unusual about a line starting at 0,0 and hitting any other lattice point.

Now consider whether you could start at 0,0 and draw a line which would not intersect any point in the lattice, even if we extend the lattice from this 20x20 grid out to infinity? Not only is that possible, there are an infinity of such lines -- infinitely more of this type of line that never hits a point than there are lines that do hit a point.  So, if we did a random line, the probability that we would pick a line starting at 0,0 (and heading "northeast") that would hit any lattice point is virtually zero.  Virtually zero is a low probability, but we previously agreed that there's nothing unusual about a line starting at 0,0 and actually hitting a point.

I can think of a couple of real-life examples of this.

First, your odds of buying a lottery ticket and being a multi-million dollar winner are close to zero, but it's not unusual for somebody to win (in fact, it's legally required).

Second, I remember a news story a few years back about a couple who had five children, all born on Valentine's Day.  The newsman claimed the odds were very low -- (1/365)^5.  But were they really? You'd have to assume that the couple was trying to have their child on Valentine's Day, and in that case it wouldn't seem extremely unlikely.  After all, my mother said all five of us kids were born on the due date given months earlier, a pattern I cite as proof of my mother's Germanic sense of order.  "OK, kid, you've been in there full term. Time to get out."