I was intrigued by a bit of clickbait that said "What TV show was #1 the year you were born?"

But it was depressing to see that they only provided information beginning 10 years after I was born. I felt instantly older.

So, I decided to look further.  One of the interesting things I found was how different the top shows are from what's on TV now.

Let's take the oldest ratings I could find, for the 1950-51 season, from http://fiftiesweb.com/tv/tv-ratings/. 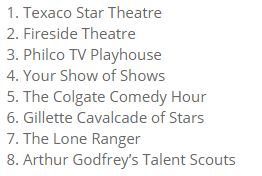 We see actual TV plays here at the top -- a genre that's disappeared.  Each week there would be a different play, unconnected to what was shown the week before.  There's a couple of comedy-variety shows (not many of these any more), one western, and Talent Scouts, a distant cousin to "The Voice" and "America's Got Talent". 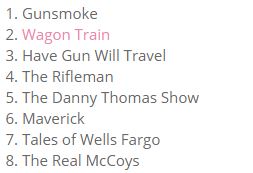 Except for the Danny Thomas sitcom, all off these top shows are Westerns -- a genre that's pretty much disappeared from prime time TV now.  (Arguably, The Real McCoys was more of a rural sitcom.)

Even those of us who lived through these days tend to remember best what's still shown on TV. Those are mostly sitcoms: I Love Lucy, Mayberry RFD, The Brady Bunch, and so on.

In terms of drama shows from that era, the one that comes first to mind is The Twilight Zone. Twilight Zone is still shown on reruns, and deservedly fondly remembered.  But it never shows up in the ratings of top shows. Despite its prominent effect on popular culture later, it wasn't much respected at the time.

Mike Wallace asked [Rod Serling] a question illustrative of the times: "...[Y]ou're going to be, obviously, working so hard on The Twilight Zone that, in essence, for the time being and for the foreseeable future, you've given up on writing anything important for television, right?"