How will the Republicans spin Trumpcare 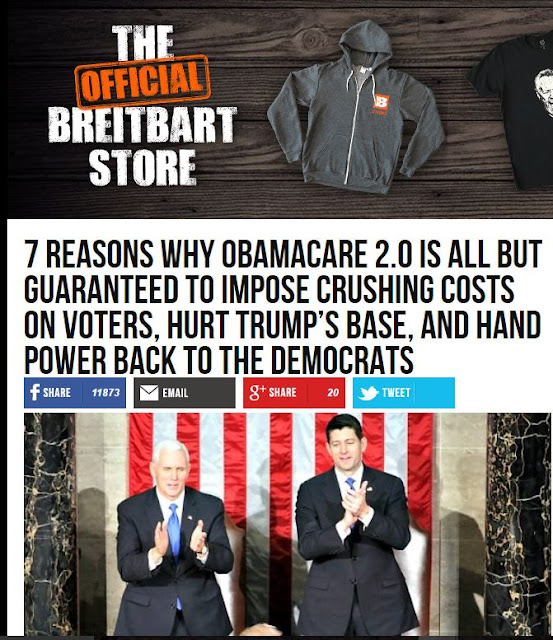 So what's the political game here?

Having been wrong numerous times before, I tentatively propose this is what's happening.

1. Congressmen are more afraid of losing re-election than anything else. Having promised for years to "repeal and replace" Obamacare, they have to propose something. Hence, Trumpcare. So they've proposed something.

2. They are hustling this thing through the House, without waiting for the CBO to pass it through committees, and without waiting for a really thorough job of estimating.  This is a complex bill, and you don't just enter the numbers in Excel and read out the answer.

3. Let's suppose it passes the House, but not the Senate -- Senator Rand Paul, R-KY is already on record as opposing it, and others are skeptical. Possibly 0 Democrats will vote for it.  So, in 2018, they can say they tried to repeal and replace, but those awful Democrats blocked the bill.

4. Trump's already blaming Democrats from blocking the bill, even before there have been any real votes, just to get the ball rolling. http://www.cnbc.com/2017/03/09/trump-reportedly-says-hell-blame-democrats-if-gop-health-care-plan-fails.html 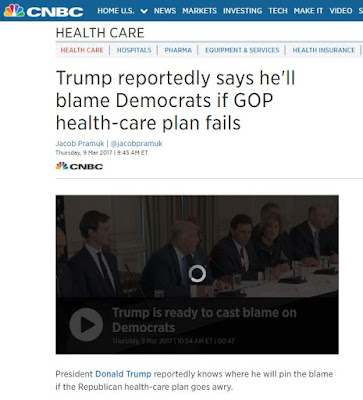 5. Since Trumpcare won't actually be in place, it's flaws won't be apparent -- such as the fact that Trump supporters seem likely to be particularly hurt by the bill. So they can still run against those demon Democrats.

6. If Trumpcare isn't in existence by 2018 (point 5) this means Obamacare probably will be. But the added uncertainty about Obamacare is likely to further weaken those parts of Obamacare that need fixing -- e.g. the insurers bowing out, the big price jolt when you move from subsidized to unsubsidized, the increase in price caused by certain mandated coverages, etc. So, instead of fixing up Obamacare the way you'd repair a house you just bought, they're going to let it decay like a 90 year old woman on a fixed income trying to get by without fixing anything.


What should we do, not that we'll do it? 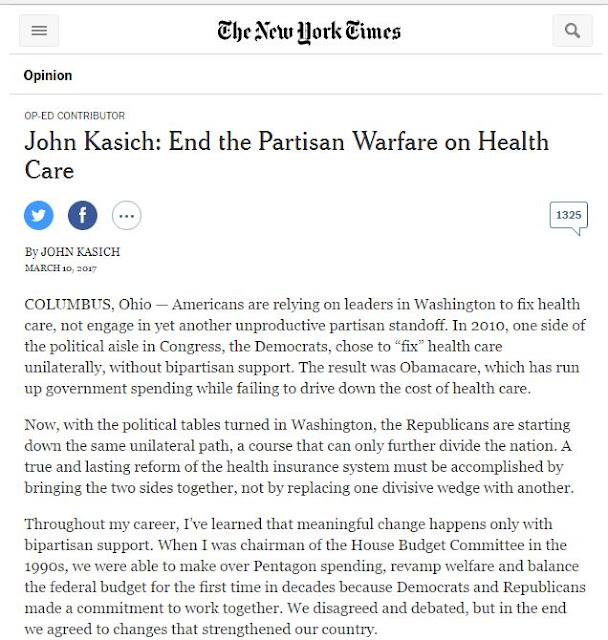 But, if anybody was listening to Kasich, he'd be president now -- he was certainly a better candidate than Hillary or Trump (and that's coming from me, a liberal Democrat).
at 7:30 PM