Just road segments on this map 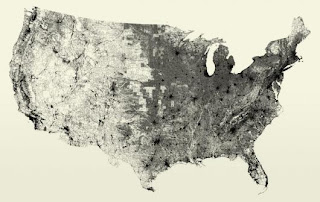 Ben Fry has taken the US Census's TIGR road segment database and just laid that out on a map. A small version of this map is above.

This is fascinating as a map, but also brings back a memory. Six of us spent one summer in college with the job of updating the TIGR maps for the St. Louis metropolitan area after the 1970 census. Day after day, we'd sit in an office in downtown East St. Louis (cheap rent) and work through street segment by street segment, odd address range on one side (401-499), even on the other (400-498). It was both fascinating and mind-numbing.

We seldom were able to do any field work. We had regular maps. We had utility company maps (which had each decent-sized tree on them, as well as the shape of the house and the place where utilities entered and the locations of power lines and transformers). We had a reverse phone book -- when we got stuck, we'd just call somebody up and ask them.

The TIGR system was just getting started, and the earlier version we were editing had lots of errors. Plus, there had been a lot of building in the past few years, so blank areas on the map were now subdivisions. One of the fascinating things to see what the sort of constraints the node relationships put on the shape of the final map, even without longitude and latitude data for the nodes.
at 10:13 PM