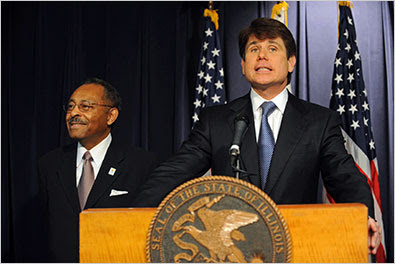 What to make of Blago appointing Roland Burris to Obama's old Senate seat?

Despite his lawyer stating he wasn't going to appoint anyone, I figured he would appoint somebody, just to stir the pot a little.

I figured it would either
(a) someone very hard to refuse, and Burris is going to be hard to refuse,
or
(b) somebody appointed just to be irritating -- Bill Ayers was my thought in this category, but it seemed unlikely Ayers would have accepted the appointment.

Jesse White, the secretary of state, has said he won't certify this. But it's unclear White can make this stick. Blago is still governor, and has the right and duty to fill the Senate seat. Burris is a qualified candidate.

The U.S. Senate has said they won't accept any Blago appointment. But Burris will be hard to turn down -- he's not much connected to current Illinois politics over the last few years, he's prima facie qualified, and he'd be the only black senator. Making it harder is the dubious legality of refusing a legal appointment.

As for Burris: my guess is that he sees this (1) as a crowning to his political career and political ambition, and (2) as a way to avoid the seat being open for a very long time at a critical juncture in U.S. history.

Burris probably justifiably feels that if the next governor was looking for a candidate who's a well known Democrat but not involved in the current mess, he might get the appointment anyway, so why not take it now? If Burris had been shy to seize opportunities, he would never have been the first black elected to statewide office in Illinois.
at 4:46 PM

Email ThisBlogThis!Share to TwitterShare to FacebookShare to Pinterest
Labels: Blagojevich