I've been doing more reading on electronic devices such as my Blackberry (Mobireader) and Ipod Touch (Stanza).  My short term aim to to read some classics that I've never read,  and which are available free via the marvelous Project Gutenberg.

This is by no means Twain's best work. He's famous now, and on an around-the-world lecture tour, and he's returning to his roots as a travel writer to generate some cash. Some chapters incorporate so much extraneous material that he must have been paid by the word and also gotten far behind on his deadlines. Still, there are some good Twain quotes:

"The captain has been telling how, in one of his Arctic voyages, it was so cold that the mate's shadow froze fast to the deck and had to be ripped loose by main strength. And even then he got only about two-thirds of it back. Nobody said anything, and the captain went away. I think he is becoming disheartened ."


I'm very tempted to read The Vicar of Wakefield after this review:

"Also, to be fair, there is another word of praise due to this ship's library: it contains no copy of the Vicar of Wakefield, that strange menagerie of complacent hypocrites and idiots, of theatrical cheap-john heroes and heroines, who are always showing off, of bad people who are not interesting, and good people who are fatiguing. A singular book. Not a sincere line in it, and not a character that invites respect; a book which is one long waste-pipe discharge of goody-goody puerilities and dreary moralities; a book which is full of pathos which revolts, and humor which grieves the heart. There are few things in literature that are more piteous, more pathetic, than the celebrated "humorous" incident of Moses and the spectacles."

"The principal difference between a cat and a lie is that the cat has only nine lives."

"No tribe, howsoever insignificant, and no nation, howsoever mighty, occupies a foot of land that was not stolen. When the English, the French, and the Spaniards reached America, the Indian tribes had been raiding each other's territorial clothes-lines for ages, and every acre of ground in the continent had been stolen and re-stolen 500 times. The English, the French, and the Spaniards went to work and stole it all over again; and when that was satisfactorily accomplished they went diligently to work and stole it from each other. In Europe and Asia and Africa every acre of ground has been stolen several millions of times. A crime persevered in a thousand centuries ceases to be a crime, and becomes a virtue. This is the law of custom, and custom supersedes all other forms of law. Christian governments are as frank to-day, as open and above-board, in discussing projects for raiding each other's clothes-lines as ever they were before the Golden Rule came smiling into this inhospitable world and couldn't get a night's lodging anywhere....Germany found a vast slice of Central Africa with the English flag and the English missionary and the English trader scattered all over it, but with certain formalities neglected—no signs up, "Keep off the grass," "Trespassers-forbidden," etc.—and she stepped in with a cold calm smile and put up the signs herself, and swept those English pioneers promptly out of the country. ... There is a tremendous point there. It can be put into the form of a maxim: Get your formalities right—never mind about the moralities."


I suspected a tolerable bit of recycling in this book, but could seldom be sure. But a few pages after the above quote, I find this example:

"In statesmanship get the formalities right, never mind about the moralities.
—Pudd'nhead Wilson's New Calendar."


"It seemed a valuable medical course, and I recommended it to a lady. She had run down and down and down, and had at last reached a point where medicines no longer had any helpful effect upon her. I said I knew I could put her upon her feet in a week. It brightened her up, it filled her with hope, and she said she would do everything I told her to do. So I said she must stop swearing and drinking, and smoking and eating for four days, and then she would be all right again. And it would have happened just so, I know it; but she said she could not stop swearing, and smoking, and drinking, because she had never done those things. So there it was. She had neglected her habits, and hadn't any. Now that they would have come good, there were none in stock. She had nothing to fall back on. She was a sinking vessel, with no freight in her to throw overbpard and lighten ship withal. Why, even one or two little bad habits could have saved her, but she was just a moral pauper. When she could have acquired them she was dissuaded by her parents, who were ignorant people though reared in the best society, and it was too late to begin now. It seemed such a pity; but there was no help for it. These things ought to be attended to while a person is young; otherwise, when age and disease come, there is nothing effectual to fight them with." 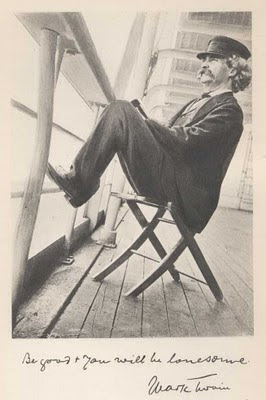 Email ThisBlogThis!Share to TwitterShare to FacebookShare to Pinterest
Labels: books