We're doing rolling rest days; I'm biking today and Abby  and Beth tomorrow.  I got up very early and was out the door before 6.

I outsmarted myself.  I'd heard you had to ride on the I-90 shoulder to get into Rapid City, but Google Maps for bicycles suggested an alternate route using Airport Rd, Anderson Hill Rd, old US 14-16 and old US 14.  This sounded good. 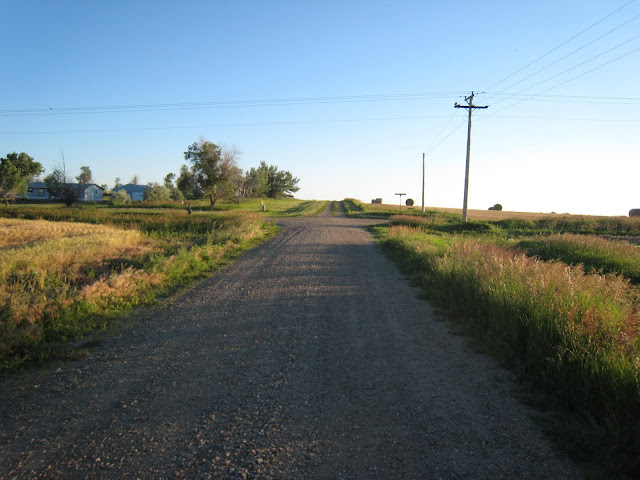 Just past the airport, Airport road turns into gravel -- fairly soft gravel at that, so it's hard to bike in. But, I thought, that's just temporary.  But no.  Anderson Hill Rd was even worse, and had hills, including one place where it went straight down off the wall into the river valley below. (like the Badlands, but vegetated and not as steep).  I couldn't see any way I would stay upright on what seemed to be at least a 10% grade, so I WALKED DOWNHILL! Even worse, I had to ride the brake to keep the bike from taking off.

Old US 14 and 16 had been turned into a gravel road. You could see some rock-sized chunks occasionally, but definitely they had decided gravel was easier.  After nearly 20 miles of this, I got on the I-90 shoulder. 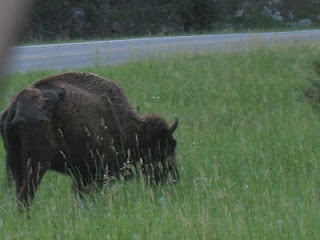 Oddly enough, I beat the other 3 to the hotel by several minutes.

We went auto touring in the afternoon to Mt. Rushmore, Wind Cave, and Custer State Park.  After  vain hunt for bison earlier in the day, we saw two rather distantly just before leaving Wind Cave and two near the highway in Custer -- the one on my side of the car was rather scraggly.
at 9:07 AM