Does Benford’s Law show financial fraud is increasing? An alternative

This great post by Jialan Wang indicates the possible increase in “creative accounting” over time, as measured by Benford’s Law.

There  is a simple explanation of Benford’s Law at http://marginalrevolution.com/marginalrevolution/2011/10/deviations-from-benfords-law-over-time-in-u-s-accounting-data.html and http://en.wikipedia.org/wiki/Benford%27s_law

In particular, there is this striking graph showing that the lack of fit to Benford’s Law is increasing over time, which might show “accounting statements are getting less and less representative of what's really going on inside of companies. The major reform that was passed after Enron and other major accounting standards barely made a dent.” 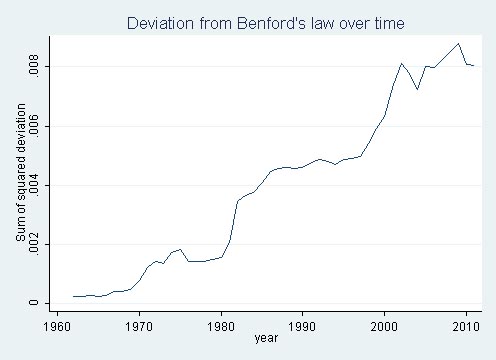 I suspect Wang may indeed to pointing out questionable accounting, but there are alternative explanations.  I posted this comment on Marginal Revolution’s posting:

Possible alternative explanation: Because there has been an increase in reporting requirements during this time, have some of these numbers been “non-Benford-compliant”?

For example, package sizes in a supermarket are not Benford compliant (and I know this from testing it) because so many packages are the same size: 16 oz, 24 oz, etc. You have a lot of 8 oz packages but not a lot of 7 oz packages. But there’s no fraud involved in supermarket package sizes not being Benford-compliant.

Is there a whole class of numbers being reported now (but not in 1960) which aren’t Benford-compliant even if non-fraudulent?

I suspect that a lot of it is due to numbers that have to be made up, because their valuation isn’t really priced by a market.

Ah, yes. “The man wants a number. I gave him a number.” It would come as no surprise if valuations which were not a function of actual working markets would fail to follow Benford’s Law.

So that seems to me to be a possible alternative, depending on the source of Wang’s data. Wang isn’t being coy about it – I’m just not that familiar with the characteristics and sources of that data.

One possibility comes to mind.  It used to be that certain assets could be carried at purchase price – an actual price which would be expected to follow Benford’s Law.  But over time I believe more assets are required to be “marked to market”, which is fine if there is a market, but gets somewhat subjective if there is no active market.  For example, I can easily determine the precise value of 1000 shares of PepsiCo stock as of December 31, 2010 but I cannot easily determine the precise value of 5% of a private company which does not trade on an exchange.  So, “mark to market” may be overall a more accurate picture of the company’s position, but produce numbers which are less compliant with Benford’s Law.