Too strange for fiction

Mr. Weiner, appearing shaken and at times rambling as he faced reporters, revised his previous estimate of the total number of women with whom he had engaged in sexual encounters online to 10, up from 6.

But in a sign of how difficult the furor over his behavior may be to contain, he made clear he could not say for certain how many women or lewd images might yet surface.

“There are more than — there are a few,” Mr. Weiner, a Democrat, said with a stammer. “I don’t have a specific number for you.” Later, he tried to explain the sequence of his Internet relationships: “Sometimes they didn’t go consistently. Whatever.”

And yet his wife supposedly knew about all this before he re-entered politics and supported/supports him.  This is a woman who really, really, really has a desire to be married to an important politician. 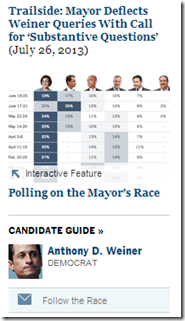